Since my review of Meat Kitchen, a number of you have asked me to report on more kosher restaurants in Tel Aviv — including one memorable gentleman on my Instagram.

This reader (I won’t name him) was looking for a fantastic kosher venue for a meal with his girlfriend, specifically somewhere with a romantic atmosphere and picturesque view. We all know how the right setting can help to make a special night even more so, and I thought 2C would be the best option.

However, there was just one tiny problem: I’d never eaten at 2C, and couldn’t recommend it based on my own experience.

Well, as my readers are my inspiration for this blog, I committed to visiting this popular kosher restaurant to offer you this gentleman — and the rest of you! — a fair, honest review!

As you may know, 2C boasts an experienced chef in Yossi Badash, a rare location, and is hailed as one of Tel Aviv’s most prestigious venues. But do the food and service match the extraordinary view beyond the windows?

As I rode the elevator from the Azrieli round tower’s parking lot up to 2C (on the 49th floor!),  I felt real excitement building inside me, unlike anything I’ve experienced before visiting a restaurant.

I was struck by a true sense that something big was about to happen, and that was certainly the case. After all, it’s not every day I eat where I can look out over the sprawling metropolis that is Tel Aviv.

When I reached the 49th floor, before I went into the restaurant, I walked to the empty open space on the other side: this offers the chance to look upon the eastern part of the city. The landscape was spectacular to say the least and put me in a great mood for the evening ahead.

Fun fact: after taking pictures of that beautiful view for a few minutes, I almost forgot that I was actually there to eat ☺

When I approached 2C’s entrance, the friendly hostess took us to the table I’d booked in advance. Of course, I ordered a place by the window overlooking the stunning beach line of Tel Aviv — and what a fantastic decision that was.

The view simply hypnotized me, even more so than the one I’d enjoyed moments earlier. I grabbed my camera and snapped images from almost every angle I could. I have to be honest: even though my stomach was rumbling, the food was less interesting to me in those exhilarating moments.

But that was all about to change when the dishes started to arrive.

I have to note how clean and beautiful the restaurant is, with very comfortable chairs. The tables may be a little too small in the area near the windows, but not enough to detract from our enjoyment.

Pleasant pop music played at a soft, unintrusive volume,  adding to the luxurious atmosphere and ambiance.

So, what’s the score for the venue itself? A mighty 11/10! (a score kept only for very rare occasions)

This dish was particularly colorful (as you can see in the picture above), while the taste was fresh and inviting. The cigar with the egg — a very trendy dish (called Burika) in Tel Aviv today — lent the dish a distinctive, interesting touch.

I’m not a big fan of Burika, but it was nice to see such a successful combination of modern food and street food.

Another dish brought to the table was Tuna Tartar. This included a red tuna tartar served on quinoa and herbs, with Ponzo sauce. In my opinion, this dish was better than the previous one: the tuna was succulent and its combination with quinoa was terrific.

I actually finished it by myself, even though I knew a lot more food was on its way!

On the recommendation of our friendly waiter (as usual), we ordered the restaurant’s two flagship dishes: Sea Bream Fillet and Tornado Rossini.

The Rossini was served as a combination of beef fillet and foie gras, with beef stock served on truffle puree and asparagus. The fillet was soft and delicious.

The dish reminded me of the Tornado Rossini I had eaten at Meat Kitchen about a month earlier. To be honest, I liked that one a little bit more, but 2C’s team certainly knows how to prepare it properly.

For me, this dish was the most successful of the evening: each bite was a palatial paradise. I ate every last piece too — and left nothing for my friend ☺

Full disclosure: by the time I reach dessert, I’m usually so full that I sometimes can’t stand the thought of putting another morsel in my mouth.

However, 2C’s portions were light enough that I actually had enough room in my stomach for a dessert or two — yet another exciting aspect of this experience.

When consulting the waiter, I told him I was interested in three different desserts and asked for his recommendation. He suggested an extremely generous (and unexpected) compromise: «take two desserts, and the third would be on the restaurant!«.

Surely, readers, you know me well enough by now to know I accepted the offer without hesitation! I knew my hungry friend would help me finish all three desserts too, of course — I’m not quite that greedy.

So, we took Crème Brulee, Choco-Coco and Vonnka. Remember that the desserts are parvee, and it’s never easy to make a delicious parvee dessert.

For those who love a sweet dessert, I would highly recommend the Crème Brulee combined with coconut milk and strawberry confiture, accompanied by vanilla tuill.

For those who love chocolate, I would recommend the Choco-Coco (the flagship dessert of the place): coconut and chocolate ganache served on an Anglaise sauce, coconut milk and tempered chocolate.

And if you like rum-chocolate with currants and kadaif you must taste the Vonnka.

The service I received at 2C was flawless. The waiters were available and nearby most of the time, always smiling and courteous. Surrounding tables were served well too: I spoke to a few fellow diners who were very satisfied with the level of service.

And what about the price? As expected, 2C can be considered a high-end restaurant. When you arrive at a venue like this, you have to understand that you’re paying for a number of things — the unreal scenery and location, the food produced by a well-known, professional chef, and kosher food, which is generally more expensive than regular food.

All these criteria combine to create a price that certainly doesn’t suit everyone. 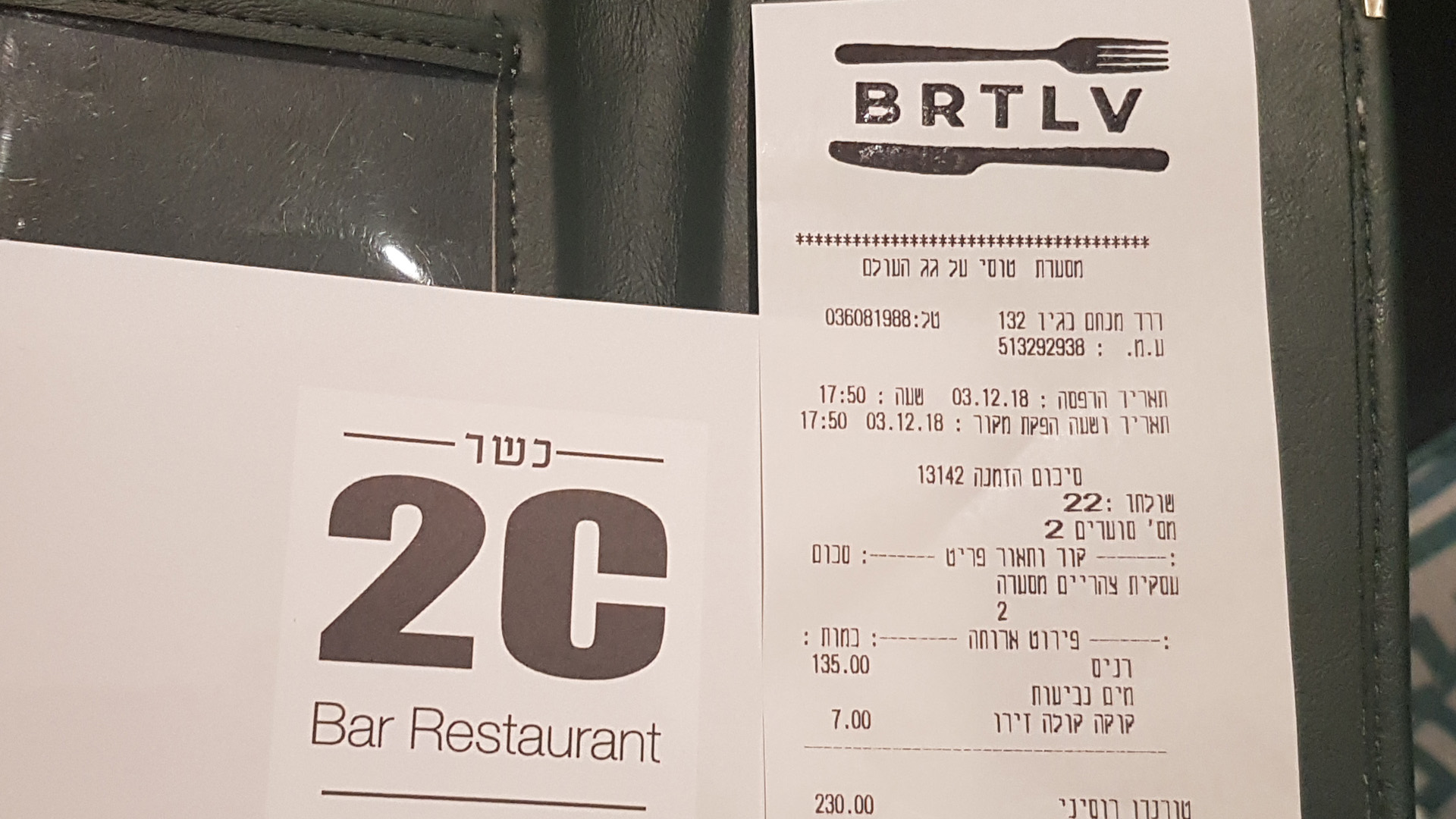 Without a doubt, my visit to 2C was an experience unlike any other. Unfortunately, I’m still not a millionaire (yet!), so I may not go back in the near future.

But for anyone who can afford it, I highly recommend visiting 2C at least once in your life. I won’t forget that evening — thanks to 2C for a great experience.