In the past few weeks something strange has happened. I started getting lots of emails and some messages on my Instagram account from people reading my blog (mostly French people) about a restaurant named Nina Sushi in tel aviv.

The truth is, I‘ve been living in Tel Aviv for several years and have never heard of this restaurant. When I researched a little more deeply, I realized that this is a relatively new restaurant right in front of the sea near Gordon Beach.

As the proud owner of the “Best Restaurants in Tel Aviv” blog, I felt a strong obligation to visit the restaurant as soon as possible for you my loyal followers.

But there was just one problem and it’s a big one. I really like to eat in restaurants of all kinds, but sushi, has never been a favorite of mine. Therefore, I invited my good friend Ben to join me for a Friday lunch at the restaurant.

Ben is just the opposite of me. Sushi is his favorite food, and as a result, I knew that I could count on his opinion. He was gracious enough to allow me to pass it onto readers of my blog.

So after a long introduction, let’s go over Ben’s impressions from the restaurant…

Nina Sushi is located on the ground floor of Gordon Lounge Hotel.

At the entrance to the restaurant we were greeted by a French speaking hostess, who was also our waitress. The hostess sat us down on the terrace with pleasant French music in the background.

While we were reading the menu, it was possible to hear that all the guests sitting around us were speaking in French. For a moment we forgot that we were in Tel Aviv, it felt more like we arrived at a restaurant located at the foot of the French Riviera in Monte Carlo.

The restaurant is definitely in a location that any restaurant can only dream about. You can see the Renaissance Hotel on the right, the Sheraton Hotel on the left, and between them, the amazing coastline of the city. The atmosphere was relaxing and fun.
Score for the place: 9/10.

I usually take my time before I decide what to pick from the menu, but this time with Ben the decision was quick and easy. Ben, as a sushi expert, chose 2 rolls for us: Cheese Roll and Color Roll.

I also wanted to add Crispy Eggplant (filled with chicken) as a first course to have something to bite just in case I didn’t like the sushi.

After a short wait, the eggplant and the sushi arrived to our table together. The eggplant came in a plate (4 pieces) with 2 sauces of sweet chili. It was made of high quality and increased our appetite for the sushi that was already on the table.

I gave Ben the honor to try the sushi first to hear his opinion. He started with the Color Roll which was avocado, salmon and cucumber on the inside and salmon and tuna on the outside.

Unfortunately, I immediately recognized that something was wrong with Ben. According to him, the sushi was reasonable and nothing more. “The product is at the level of a restaurant in its infancy and reminiscent of the taste of commercial sushi that is plentiful in the center of the city” he says.

The second roll, the Cheese Roll, made from inside with cream (with the addition of salmon and avocado at the request of Ben), and outside was wrapped in salmon, also received lukewarm criticism from Ben.

“The roll was nice, the fish looked fresh, but they were cut a little thick in my opinion. The rice was a bit tasteless and felt too sticky” Ben said.

For dessert we wanted to order a French crepe, but unfortunately the waitress said they were out of it, so we went for an option that seemed interesting to us – Egg Choco Roll. A roll filled with rice and chocolate inside. All of this was wrapped in an omelet as well. The waitress didn’t recommend it too much, but it looked different and interesting, so we went for it. The roll was good, but not something that we would order again. 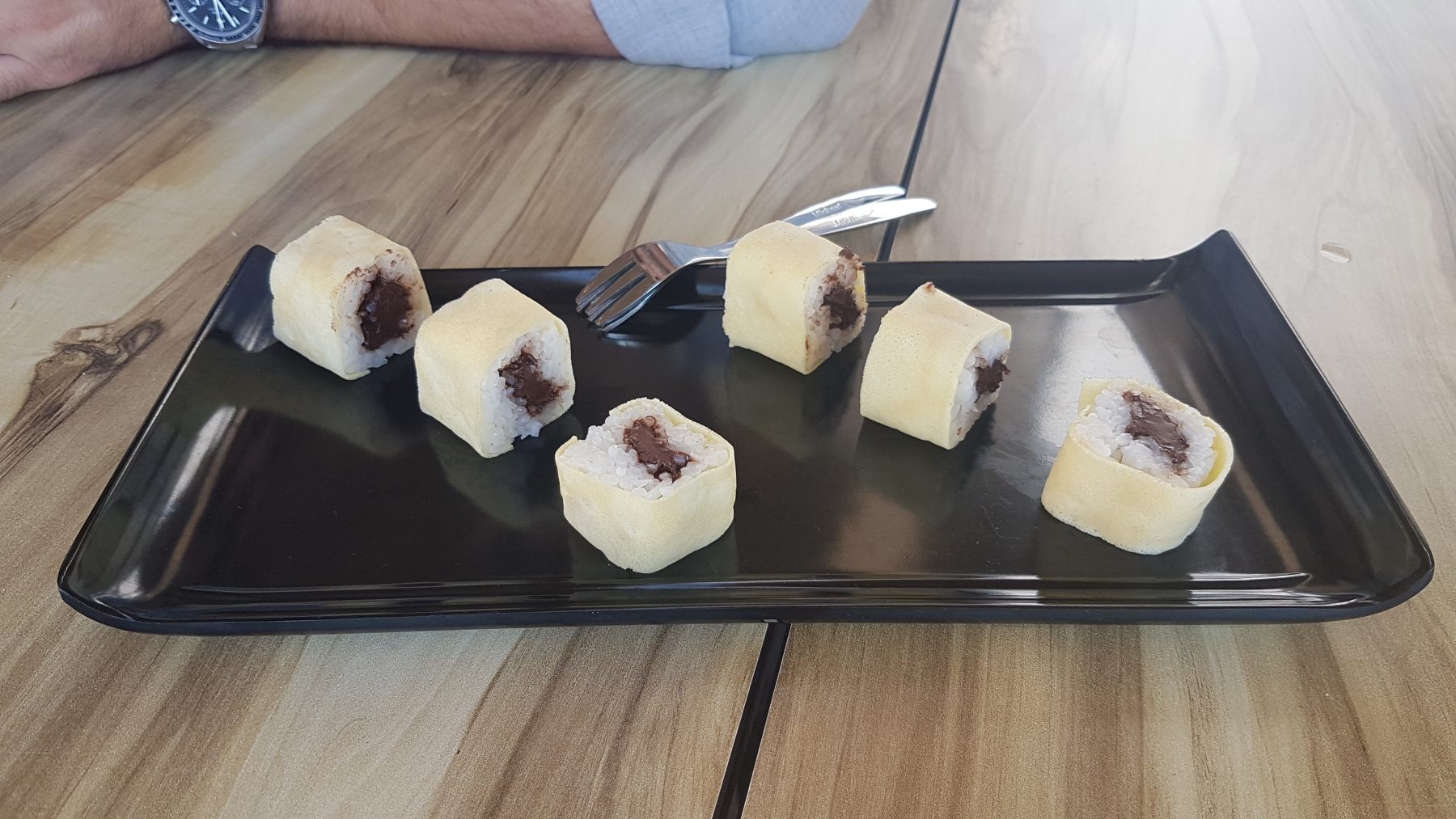 The service was fine, the waitresses were usually near by and helped with a smile. The food was a little less good than we expected, but that’s not their fault of course.

Prices are a bit high, but you can understand this because of the expensive location in front of